The 1970′s proved to be another difficult decade for Marshall and ACDO. Biological products continued to erode the trade for conventional powders, as did the consumer attitude shift towards lower temperature washing. Front loading machines had come to the market which were designed to operate at the new, lower temperatures and though original Acdo was still unchallenged as the best powder for the high temperature washes of twin tubs, it simply was not suitable for front loaders. Also, for many years, Acdo had been the detergent of choice for washing nappies, but the 1970′s saw the arrival of disposable nappies and as the popularity of these grew, the demand for ACDO declined.

In 1974 Marshall hired a Marketing and Sales Director called Tony Isbell, whose whole career had been in selling who laid the groundwork for a new selling approach, and as new salesmen were put on the ground and, more professional selling techniques introduced, slowly trade began to back up. But the company was still too reliant on one product, the company started to concentrate efforts on Glo White – which at this stage was a one product fabric whitening opportunity.

The original hand wash product was re-launched as a Wash Booster which as a ‘whites enhancer’ could be added to wash cycle. In one clever move, Glo White had been repositioned from being an occasional use niche product into a regularly used mainstream one. And a research programme revealed that the product was used to whiten their net curtains, and so technical people were sent to work and a new formulated Glo White product was launched that would bring the net curtains back to their ‘just bought’ whiteness and keeping them that way. 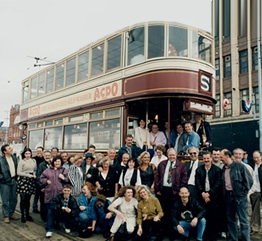